September 2020, the month when Indian government passed new laws for the Indian farmers, but it came up as a piece of paper issuing a “Death Warrant” for the farmers of India. During November farmers from Punjab and Haryana started marching towards Delhi protesting, demanding to repeal the laws. Punjab and Haryana are the two states which are popular for their agriculture sector, the productivity there is real high. The question is what the law says, they say that the private buyers can buy and hold the produce for future sales, which earlier only the government officials were obliged to do, it specifies the contract farming where farmers have to cope with the demands of a specific buyer. The rules for storage, sales and pricing of the produce are compromised and the Farmers are exposed to the free market, which is a clear shot to exploitation of the farmers. The biggest change suggested by the new laws is the withdrawal of MSP (minimum support price), it is an assured floor prices which is provided to the farmers for their produce by government. Because of these rules most of the small, medium sized and marginalized farmers would get exploited. As India is the country where the supply from agriculture sector is really high, if the laws got implemented the big businessmen would drive the prices down. People would think that the seller can fix their own prices at high levels, but the fact is the number of suppliers is immense which will not help each and every farmer earn even to survive for their livelihood.

Half of the population in India relies on farming for their living like 2 meals a day and a roof on their head. The new rules would take away this too from their hands. This is considered to be the biggest protest in history of India since now. People from Uttar Pradesh also came to Delhi to protest peacefully against this decision. The government did offer amendments like the laws would be suspended for 18 months as negotiation continues but also they said they won’t do anything for MSP. Farmers stayed firm and did not agreed to any of their amendments, only if the government repeal the laws the farmers would stop protesting. It’s been three months still millions of people are protesting with all their heart on the roads on Delhi in cold. Not only India but the people from India here in Canada showed their support for the millions of lives lying on the road for their own rights, because of corona outbreak they can’t travel from here to India to join them they are doing their best here.

Talking about the violence created in this protest, first when farmers were marching towards Delhi to protest, they were attacked by the government officers with water cannons, tear gas, barricades were located so that they won’t enter the city. After the water cannons and tear gas the protesters threw stones on the police officers. This is from where the violence started, still protestors reached Delhi started their protest peacefully. Protesters made and served “langar” (food) not only for the people joining protest but also the policemen and the people nearby or we can say the residents of Delhi, chanting their prayers. Not only has this but the people in favor of the Prime minister, some celebrities from Bollywood and government itself given the protesters the new name of “Terrorist”.

In every country the laws are made for their citizens with them they feel protected, they get to know that they belong there, they can say that it’s their country. The irony here is if the millions of people protesting out there are not comfortable with this law then why the government is not repealing it? The protestors are dying out of the violence created, road accidents, cold and many more reasons. We cannot say that India is a democratic country anymore. The government is doing nothing to comfort their people instead giving them a title of terrorist, prohibiting them from protesting peacefully entering the city, creating violence and letting the provider of food of almost the whole world on road. 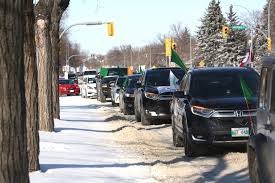 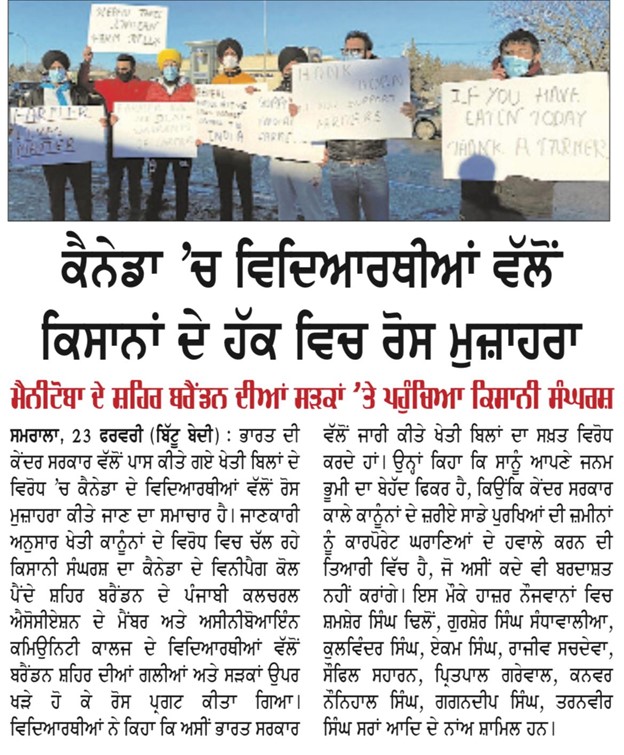 The Punjabi community of Brandon City recently in support of the Framers organized a car rally, in which approximately 125 vehicles went through the rally, the protesters also got the police escort. Before the day of car rally also some of the protestors with boards protested on the foot paths. People passing by honked the horn of their car showing support. Not only Brandon, people living in different countries and the states protested the same way to put some contribution to what the Farmers in India are doing and showed respect. It’s been more than 100 days since the protest started in India and still no action is taken by the government to comfort the protestor’s interest. As being a farmer myself I hope the best for the ones in India who are struggling for their rights, should get their rights.